Church of God in Toronto 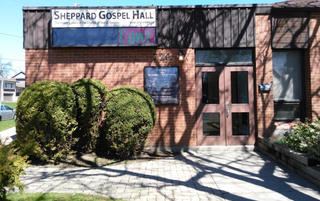 The Church of God in Toronto is an evangelical group that has existed in the city for over 100 years, and, since the early 1980’s has been based at Sheppard Gospel Hall, Sheppard Avenue West, Toronto. The Church is linked  very closely with sister churches of God in Canada (Brantford, Hamilton,  Mount Forest, Vancouver and Victoria), the USA (Littleton and Trinidad, Colorado), Jamaica (Kingston) and over 100 other Churches of God around the world.

The Church of God in Toronto is made up of a variety of people from many different backgrounds and several different countries.  But who we are and where we are from matters less than our common desire to be disciples of the Lord Jesus who aim to serve Him in the way that the early Churches of God did, almost 2,000 years ago, as recorded in the New Testament.

Our website provides some detail about what we believe and how we operate, but the most concise explanation is actually contained in the Bible itself in Acts chapter 2 verses 41 and 42:

“Those who accepted his message were baptized, and about three thousand were added to their number that day.  They devoted themselves to the apostles’ teaching and to fellowship, to the breaking of bread and to prayer.”

Often called “the seven steps”, the first three are actions that are required only once in a person’s life, but the other four are meant to be repeated lifelong.  As a church we place a high priority on learning and living in accordance with the apostles teaching, having fellowship with each other as fellow-workers in the Lord’s work and being a support network for each other, meeting each Sunday morning to keep Jesus’ command to remember him, as well as meeting in various locations every week to pray collectively.

All are welcome to come and witness what we do!